Some of Britain’s biggest Flat meetings, headed by the June jewels of Royal Ascot and the Epsom Derby, are shrouded in uncertainty after the BHA announced racing will be shut down until the end of April due to the coronavirus outbreak.

The sport battened down the hatches after Tuesday’s behind-closed-doors meetings at Taunton and Wetherby.

The initial shut down will cost the sport an estimated £10million income alone from the Levy on betting. But the cost for racecourses and participants simply cannot be calculated.

The five-day Royal Ascot festival, due to start on June 16, attracts over 300,000 spectators

The related betting industry is also in free-fall.

In theory, racing could start up again on May 1, a day before the 2,000 Guineas at Newmarket, first Classic of the season, is run.

By then a series of traditional trials and warm-up races will have been lost and it was impossible to find anyone in the sport on Tuesday who believed that relatively quick return to action is a likely possibility as the country entered a war footing in the fight against COVID-19.

The Kentucky Derby, America’s biggest race traditionally run on the first Saturday in May, has already been postponed until September. 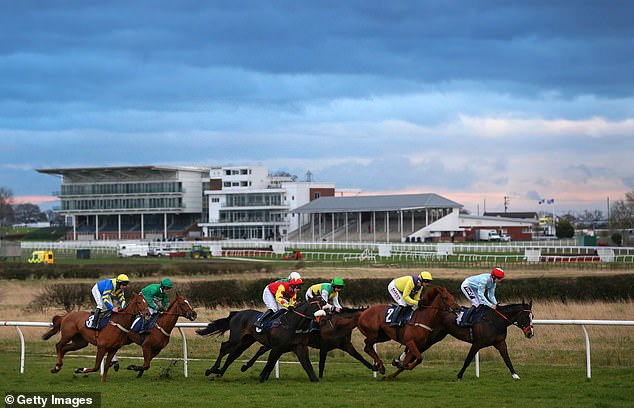 Ascot, whose five-day royal fixture is due to start on June 16, posted a message on its website urging customers to be patient and saying: ‘We are considering a range of options. It is too early to be definitive or even speculate on how this situation will affect the summer programme.’

Spokesman Nick Smith said: ‘There are no certainties and we are one industry in a world of industries in exactly the same position. You can plan with optimism but no surety.’

The slight consolation for jumps trainers, owners and jockeys as they face up the close down is that, while they will lose some significant meetings headed by the Grand National and including the Scottish National and Bet365 Gold Cup at Sandown, their season is almost run and they can give some of their horses an early break.

For the Flat racing world, their Turf Flat season with its all-important Classics whose winners fuel the Thoroughbred breeding industry, is just around the corner. 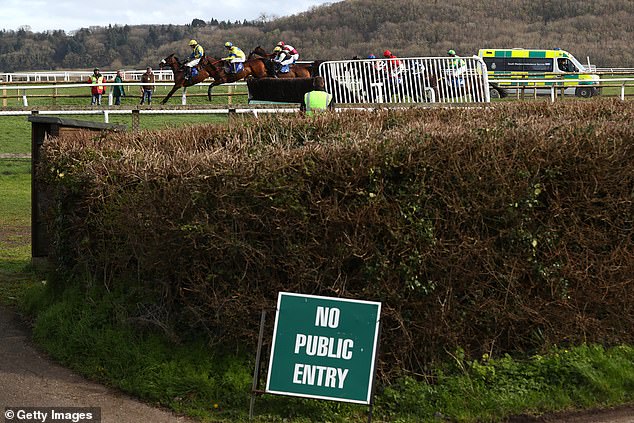 Derby winning trainer William Haggas, who is based in Newmarket, said: ‘I suspect we will lose a chunk of the season. Re-scheduling is complicated and difficult.

‘It is frustrating but as long as staff are safe I am sure our owners will understand. How can you plan in this situation? I won’t be galloping the horses tomorrow.’

Newmarket colleague Hugo Palmer added: ‘One of the things about the Flat calendar, there is not a spare minute.

‘We don’t know how long we will be off. There will come a cut-off point where people might have to say that was the racing year that never was.’

The BHA said it had taken the decision to close down the sport to protect essential emergency services and the health and welfare of staff working in the racing industry.

Chief Executive Nick Rust said: ‘This is a national emergency the like of which most of us have never seen before.

‘We’re a sport that is proud of its connection to rural communities and to the local businesses that support our industry. But our first duty is to the health of the public, our customers and to racing industry participants and staff so we have decided to suspend racing following the government’s latest advice.

‘By stopping racing, we can free up medical resources, doctors and ambulances, be they private sector or NHS, to assist in the national effort to fight this virus.

‘There will be difficult months ahead for many of us. We need to focus now on ensuring that we can continue to look after our horses as the virus affects the thousands of participants and staff who dedicate their lives to caring for animals.

‘We need to do what we can to support businesses inside and outside racing and the many people whose livelihoods depend upon this £4 billion industry.’

The Levy Board has reserves of £45million but chief executive Alan Delmonte said they would have to be spent wisely despite the sport being on the brink of a financial abyss.

A decision whether Irish racing can continue behind closed doors will be made by Horse Racing Ireland on Wednesday.

Another 21 people in Stoke-on-Trent and Staffordshire have died after testing positive for coronavirus. The latest figures from Public Health

Port Vale injuries and suspensions latest ahead of Forest Green

‘Superb’ – Stoke City fans have say on transfer window, team for Blackburn and what else is needed