The delayed Flat season is just two weeks old and already Cieren Fallon Jnr can celebrate a set of firsts.

An initial ride in a Classic on George Baker’s unplaced Les Hogues in the 1,000 Guineas plus a first win in a Group race on his first ride in a contest of that stature on Roger Teal-trained Oxted in the Abernant Stakes at Newmarket.

The 20-year-old, who landed last season’s champion apprentice title, is continuing to show he can make things happen, a talent underlined when he edged home on 200-1 winner Intercessor, trained by John Gallagher, at Newbury on Saturday.

But Fallon has changed his focus this season.

Retaining his apprentice title would be good but stepping up the quality of his mounts and opportunities in bigger races is the priority and there would be no better place to continue that progress than the Royal meeting where his father Kieren rode 30 winners.

Cieren jnr said: ‘It was my goal this season to ride a Group winner and to do it so early was a great way for me to start the season. We’ve nailed it.

‘After what has happened with the season being delayed, me and my agent decided to change the goals and try to get in the bigger races and ride bigger and better winners. Hopefully it will help me improve as a rider. 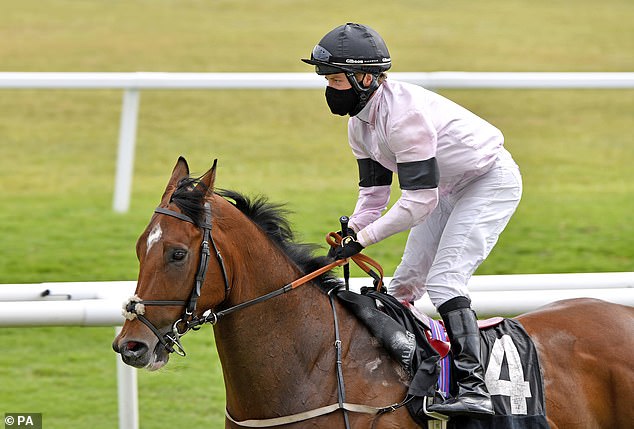 ‘We will try to ride as many winners as possible and if that means being champion apprentice again great but we would rather go to Royal Ascot for one big ride than head to a smaller meeting even if I could ride six favourites there.’

Oxted will be one of Fallon’s big hopes this week when he lines up in Saturday’s Group One Diamond Jubilee Stakes. As satisfying as the colt’s win in the Abernant was in itself, Fallon (right) took as much pleasure from seeing how he has himself improved after spending three months in Florida over the winter, fine- tuning his judgment of pace.

The jockey said: ‘I was learning to ride with the clock against the top jockeys with trainer Christophe Clement.

‘For the first few weeks I was not 100 per cent with the clock but Christophe made sure that by the end my times were spot on.

‘I felt I learned a lot. After Oxted had won the Abernant I looked at the times and I got the fractions perfect on him. It was a good sign that I did come away from America learning something and hopefully we will see that throughout the season.

‘America has been a big advantage for me. It was for my father. Look at Hollie Doyle, she was out there for a while and look at what she has done since she came back.’

Fallon, who is based with the William Haggas stable in Newmarket, is booked to ride Habub (Buckingham Palace Stakes) and Blue Laureate (Ascot Stakes) tomorrow. He also partners Charlie Hills-trained Afaak in Wednesday’s Royal Hunt Cup when the horse tries to repeat his 2019 success.

But it is Oxted who carries the biggest expectations. The pair landed last season’s Portland Handicap at Doncaster under top weight.

Fallon said: ‘For a three-year-old to win the Portland at such a level off top weight, shows how good he is.

‘If he matured through the winter, he was definitely more than ready to tackle a Group Three race. He was only 80 per cent fit for the Abernant so hopefully he will come on for the race and we will see more in the Diamond Jubilee.’

Dad-of-three Kevin Cookson has told how he helped rescue his unconscious girlfriend from a fire which destroyed their home. Kevin,

Another 234 coronavirus cases in Stoke-on-Trent and Staffordshire

Staffordshire man charged after 20 kilos of cocaine discovered in Belfast

Hawkins – I Needed Kick Up The Backside