Willie Mullins described Faugheen’s victory in the Grade Flogas Novice Chase as one of the most rewarding of his career as the veteran gelding drew a reception which electrified day two of the Dublin Racing Festival.

Gordon Elliott-trained Delta Work cemented his Cheltenham Gold Cup claims with a professional defeat of Kemboy in the Irish Gold Cup but it was Faugheen who stole the show prompting wild celebrations previously reserved for Irish equine favourites like 1990 folk hero Danoli.

After favourite Battleoverdoyen fell at the last after finally losing out in his tussle for the lead, Faugheen then had to see off the potent challenge of stablemate Easy Game by half a length.

It was a 17th career win, 11 at grade one level, for the Paul Townend-ridden 12-year-old and 2015 Champion Hurdle winner who career has been punctuated by injury.

Mullins whose Asterion Forlonge is 5-1 for the Sky Bet Supreme Novices’ Hurdle after his win in the Chanelle Pharma Novice Hurdle, said: ‘This was special. It was a proper grade one test. He has a huge attitude to racing. I thought our other horse was going to beat him but he dug deep. I wanted to win in a big way. I would have been gutted if he had been beaten.

‘Last year he had physical problems and he came back and he has put three runs together now. To come back at his age and do it on the No 1 stage is special.’

Owner Rich Ricci hailed his winner and added that a Cheltenham Festival challenge, considered unlikely at the start of the season for the latecomer to novice chasing who has now won his three chase starts, is now possible. 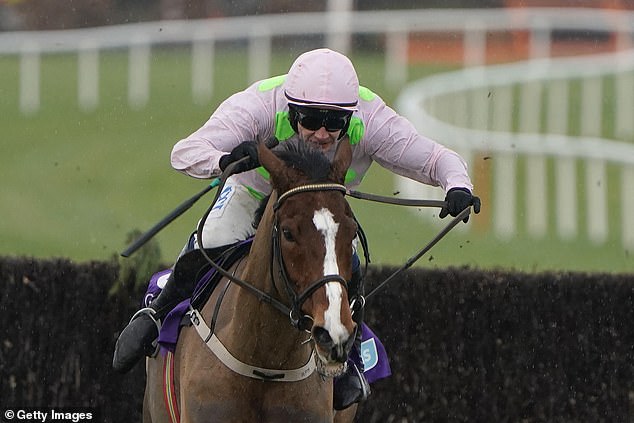 It was a 17th career win, 11 at grade one level for the 12-year-old, Peter Townend-ridden gelding

Ricci said: ‘It’s a magic moment. Annie Power (2016 Champion Hurdle winner) is the best horse I have owned but Faugheen is right up there.

‘He has had his ups and downs and has been inconsistent but I love the fact he wears his heart on his sleeve and he is a peoples’ horse. You saw the crowd today. I’d say we will look at the RSA and the Marsh Novices’ Chase at Cheltenham.’

Meanwhile, joy in the Elliott camp over the win of Delta Work was tempered with the news that his jockey Jack Kennedy had broken his right femur; the fourth time he has suffered a leg fracture in his career.

Kennedy, 20, has already missed a chunk of the season with a collar bone injury and will now miss the Cheltenham festival and ride in Gold Cup on Delta Work. He is set to have an operation on Tuesday.

Reflecting on Delta Work’s success, Elliott added: ‘It was a great race to win. He has improved with every season. We will dream about a Gold Cup now. He is bang up there with the best three-mile chasers in Britain and Ireland.’

Having won the Irish Champion Hurdle on Honeysuckle and the Arkle Novice Chase on Notebook on day one of the Dublin Racing Festival, jockey Rachael Blackmore had high hopes of a third grade one at the meeting on Aspire Tower, odds-on favourite for the Spring Juvenile Hurdle like her two Saturday winners trained by Henry De Bromhead. 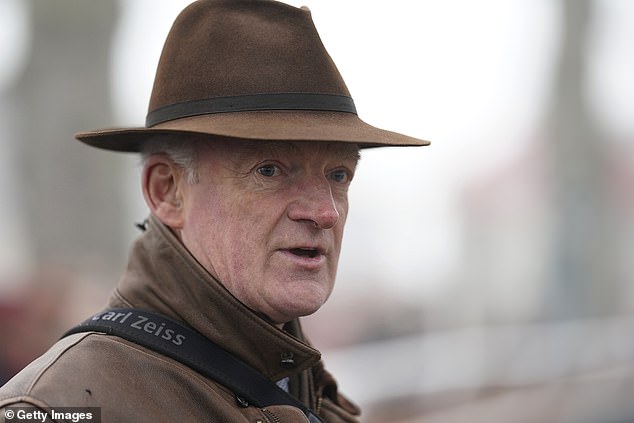 But Aspire Tower just looked to be getting the worst of the argument with eventual third Cerberus when falling at the last before Joseph O’Brien-trained A Wave Of The Sea picked up the pieces staying on for a length and a quarter victory from Wolf Prince.

With Cerberus slammed by nine lengths by Dan Skelton’s Allmankind in the Finale Hurdle at Chepstow on Welsh National day and Gary Moore’s Goshen yet to face a serious challenge in three hurdle races, Britain’s Juvenile Hurdlers look to currently hold the edge.

Dual Grand National winner Tiger Roll has returned to work after his knee operation and will have a prep run in the Boyne Hurdle at Navan in a fortnight before trying to win Cheltenham’s Cross County Chase for the third year running.

Police are appealing for information to track down a driver who failed to stop after hitting a dog. Officers were