For any young snooker player who shows potential, many an idle moment is spent dreaming of appearing at the Crucible, but promising Irish youngster Aaron Hill has been doing it since he first picked up a cue.

The Crucible Snooker Club sits just off Blarney Street in the heart of Cork, round the corner from a mural of the city’s most famous sporting son Roy Keane, Ireland’s star performer at the 1994 World Cup and captain of Manchester United during the greatest era in their history.

Hill played in the Shoot Out in February, beating Robbie McGuigan and Kyren Wilson to reach the last 32 before losing to Craig Steadman

Snooker has yet to see a genuine star emerge from the banks of the River Lee but as 18-year-old Hill prepares for life on the professional circuit, what he has already accomplished is enough to suggest that may be about to change.

“My first big memory of watching snooker is the 2013 World Championship when Ronnie won it after a year out,” he says before citing other influences like current world champion Judd Trump, and Stephen Hendry.

“I don’t even really remember him playing, but I watch him most nights on YouTube. What a battler, any match he was in was never over.”

Hendry famously earned his place on the tour less than four years after taking up the game. Hill hasn’t needed much longer to get there, having only started playing properly at the age of 13, and like the legendary Scot his natural talent became apparent from the beginning.

“I’ve never really worked with a coach,” he said. “I’ve done a bit with the national coach PJ Nolan but it’s just been a few lessons here and there. Any big tournament I’ve been involved in though, PJ has always been there for me to help with the mental side. If I’m struggling I go to PJ and he gets me back on track.”

Not that Hill has struggled much in the biggest events of his life so far, having won the European Under-18 Championship for the last two years, the latter being followed immediately by capturing the Under-21 title which secured his tour card.

“I was so tired going into the final,” he recalls, looking back on the trip to Portugal in March. “I’d been playing for two weeks, two matches a day, but once I’d won my semi-final I just relaxed in my room telling myself it was just one more match to get my tour card, then I went 4-0 up in the final playing better than I could have dreamed.” 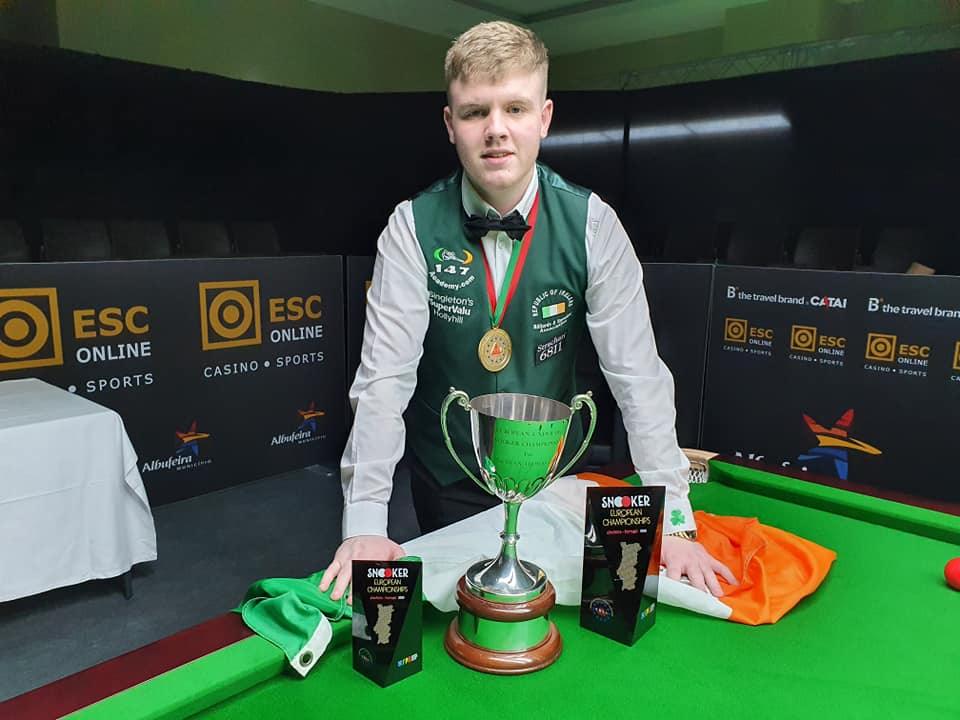 With the European Under-18 trophy

Hill was made to work hard to get over the line as his opponent Hayden Staniland of England won the next two frames, but by taking the seventh the Irishman closed out the 5-2 win which earned him the right to play on the World Snooker Tour for the next two seasons.

It also secured him an invitation into the World Championship qualifiers for the second year in a row, and Hill will travel to the English Institute of Sport next month with something to build on after performing well on his debut last year against Gerard Greene.

“I felt I could have won that match,” he said. “I should have been 6-3 up but Gerard won the last frame after needing snookers to be only 5-4 down overnight and that made a huge difference. I still competed well the next day and was leading 7-6, then Gerard made a few big breaks and won the next four frames to beat me 10-7. I feel I’m two or three blacks better now so I can’t wait to get over there and see how I get on.”

Like everyone else in the world of sport Hill’s career has been put on hold in recent months by the Covid-19 crisis, but unlike most of those he’ll be up against at the World qualifiers, he was able to keep working at his game thanks to a decision made last year to install a table at home.

“I’ve been playing full time for a year or two,” he said. “I’ve had a table in the house for the last ten months and had a lot of success since then. I usually practise for five or six hours during the day and then play against one of my buddies at night. With the World qualifiers coming up I’m going at it full on again.”

While Ken Doherty and Fergal O’Brien are both approaching 30 years on the circuit, the Dublin pair go into the qualifiers battling to retain their professional status, so as it stands Hill is currently the only Republic of Ireland player guaranteed to be on the tour next season.

He added: “Any player’s ambition at first is to stay on, and anything after that is a bonus. I’ve won three European titles in two years, so if that doesn’t give you massive confidence then nothing will.”

It’s this blend of optimism, dedication and an obvious natural talent which marks Hill out as Ireland’s finest snooker prospect for many years, and if his current career path can be maintained, it might not be long before his home club isn’t the only Crucible he’s playing at.

Stan Moody, a 14-year-old snooker prodigy from Halifax, hopes to achieve his ambition of turning pro when he competes in