Michael Holt won his first ranking title after 24 years as a pro, beating Zhou Yuelong in the final of the BetVictor Shoot Out.

Nottingham’s 41-year-old Holt would certainly have been in the conversation on ‘best player never to win a ranking title’ but has now finally broken his duck by going one better than last year, having finished runner-up to Thepchaiya Un-Nooh 12 months ago in Watford.

The Hitman earns his biggest ever payday by taking the  £50,000 top prize at snooker’s unique quickfire one-frame knockout event.  The tournament has never been won by a player ranked inside the top 16 since it was first staged in 2011 and world number 41 Holt continues that sequence.

Holt got in first in the final with an excellent long red and made 42 before missing a red to a top corner. Zhou had one chance to counter, but after potting a red missed a tough blue to a baulk corner. Holt added 22 which was enough to secure his milestone moment. 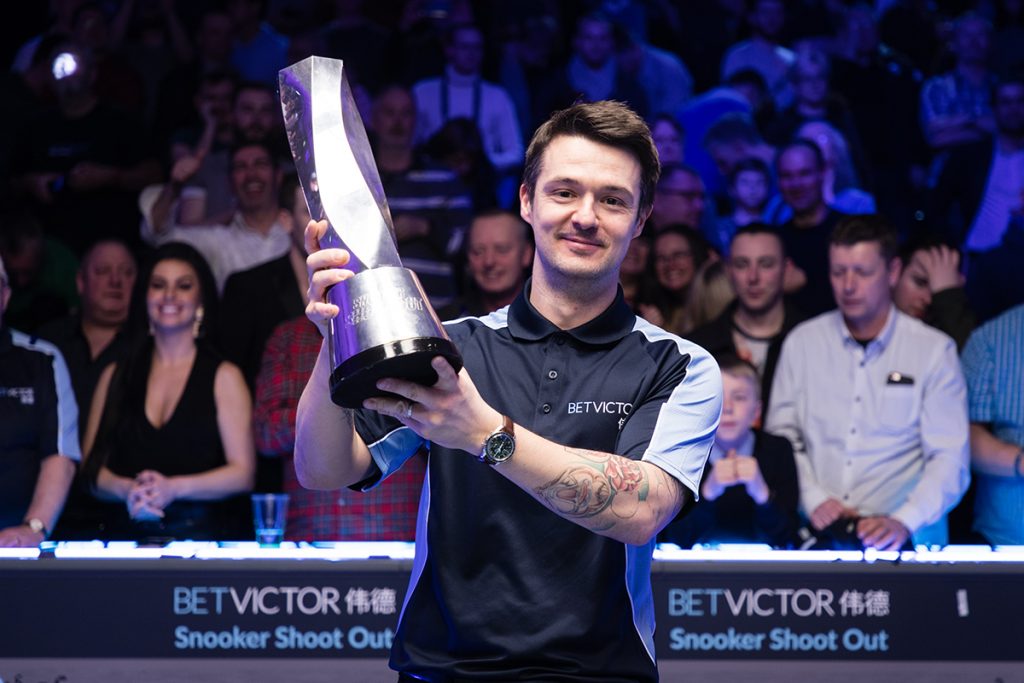 As a massive extra bonus, Holt earns a place in next week’s Coral Players Championship by climbing to 16th on the one-year ranking list. Ronnie O’Sullivan was 16th coming into this week but now he will not have the chance to defend that title, as instead Holt heads to Southport to face Judd Trump in the first round.

The spin-offs are far-reaching for Holt as he almost certainly gains a place in the Champion of Champions event in November. For the popular potter and his heavily-pregnant wife Amy, who was among the crowd, the financial rewards are life changing.

China’s Zhou was also seeking his first ranking title but has to settle for £20,000 and another runner-up medal, having lost to Neil Robertson in the European Masters final last month. Victory for the 22-year-old would have given him that spot in Southport and also boosted his hopes of topping the BetVictor European Series rankings and taking the £150,000 bonus. Instead, that race will be settled between Neil Robertson and Judd Trump at next month’s BetVictor Gibraltar Open.

“It’s amazing just to hold that trophy up,” said Holt, who turned pro in 1996 and had lost two previous ranking finals. “The clock forces me to trust my instincts and just play what I see in front of me. It’s in me to enjoy it and embrace the crowd, which helps.  I’ve had a bit of luck but you still have to pot the balls when you get chances.

“I’m 41 but that’s not old in snooker terms and I’m still eager. I’m not weathered or tired, I still have things I want to achieve. I’m as hungry as any 21-year-old. I want to keep getting better and be as good as I think I can be and see where that takes me. I have had a lean few years and it has been hard financially, so the money is brilliant.

“I can’t wait to go to Southport now because to be in big tournaments is what you play for. It will be tough against Judd but I have never minded competing against the top players. I’m looking forward to the rest of the season now.”

Care home told to improve after inspectors find it has deteriorated

A care home has been ordered to improve following an inspection. The Care Quality Commission (CQC) visited Ashview House, in

Pensioner speaks out about dangers of e-scooters