Trainer Charlie Hills admits that Battaash has put him through the emotional wringer but the equine bullet train made sure he will always remember the opening day of 2020 Royal Ascot with a broad smile.

Twice Battaash had finished runner-up to Blue Point in the Group One King’s Stand Stakes. But with that rival retired, nothing could live with Battaash as he blew his rivals away with a two-and-a-quarter length defeat of stablemate Equilateral as he covered the five furlongs in a grease-lightning 58.64sec.

The victory means six-year-old Battaash has now won all three big five-furlong races in Europe, having previously landed the Nunthorpe Stakes at York and the Prix de L’Abbaye at Longchamp.

His success was the centrepiece of a 118-1 treble for 2016 champion jockey Jim Crowley and owner Sheik Hamdan Al Maktoum, who also combined to win the Buckingham Palace Stakes with Richard Hannon-trained Motakhayyel and the Duke of Cambridge Stakes with John Gosden’s Nazeef. The high tensile temperament of Battaash, the 5-6 favourite, has cost him races in the past when he has lost his cool.

His record of 11 wins in 21 races is evidence he is not straightforward.

The fact that there is no crowd at Royal Ascot this week probably acted in his favour, but Hills reckons the gelding, who used to be like an unexploded bomb, is now easier to handle.

Hills, landing his fifth Royal Ascot win, said: ‘I am relieved and proud. He was really on his ‘A’ game today. 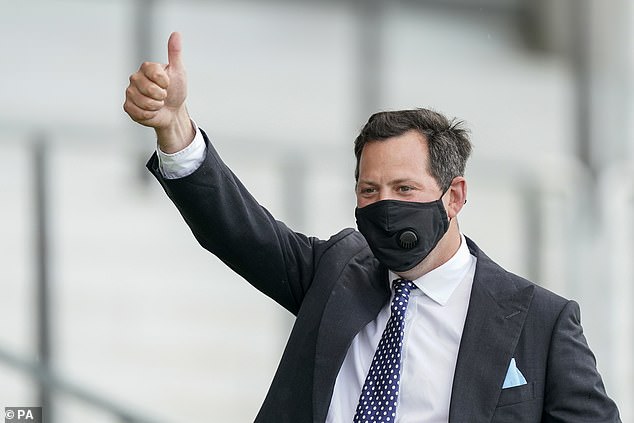 ‘He was beautifully relaxed before the race and as soon as the gates opened you could see he was going to be very hard to beat.

‘He is the horse of a lifetime. Jim didn’t have much choice but to go forward. He always looked in command and it is a real shame Sheik Hamdan was not here to witness it.

‘Battaash is six years old now and has been with me and my family for a long time. You do get very close to them and it does make you slightly well up when he puts in a performance like that.’

Crowley, who went into the day with six royal meeting victories, has been cut to 4-1 from 25-1 by Ladbrokes to be the meeting’s top jockey. He said: ‘There was nothing quick enough to lead him and I was a bit worried that the stiff uphill finish might find him out. 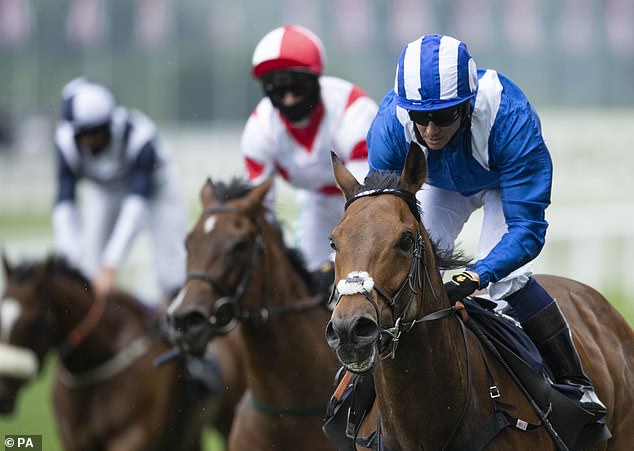 ‘I would say he’s No 1 in my career. He is one of the best sprinters in recent years. He has so much natural talent.

Next up for Battaash will be an attempt to win the King George Stakes at Glorious Goodwood for the fourth year running.

Crowley’s day could have got even better but he endured what he described as a ‘nightmare run’ on Marcus Tregoning-trained Mohaather, who was seventh in the Queen Anne Stakes.

The lightly raced four-year-old looked like he would at least have been placed had he found a clear passage.

He should get another shot at the Aidan O’Brien-trained Queen Anne Stakes winner Circus Maximus in the Sussex Stakes at Glorious Goodwood next month. 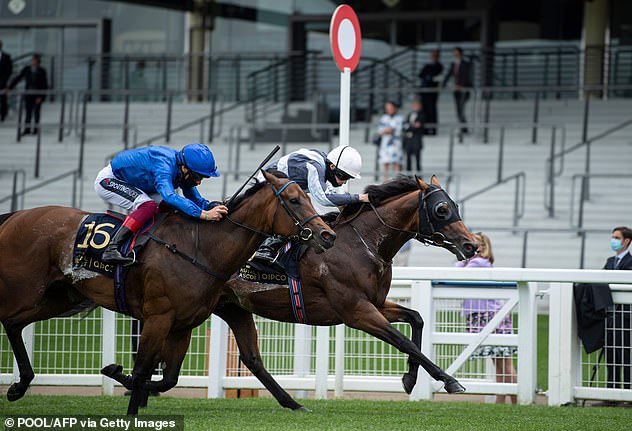 He had to dig deep as he rallied to beat Terebellum a head after losing the lead.

O’Brien, who runs odds-on favourite Japan in today’s feature Prince of Wales’s Stakes, said: ‘He has probably been a bit underestimated. He travels very strongly and then loves getting eyeballed.

‘I would imagine he would stay at a mile. The problem is he is lazy and that is why he wears blinkers.

‘It is only when the tempo is really high that he actually races, so I think mile-and-a-quarter and mile-and-a-half trips don’t allow him to focus.

‘Like a fighter, if you don’t get his blood up, he doesn’t really bother.’