Dual winner Altior has regained favouritism for Wednesday’s Betway Queen Mother Champion Chase for the first time since he was beaten at Ascot in November.

The Nicky Henderson-trained 10-year-old, who is chasing his fifth Festival win, was among the 11 runners left in the £400,000 race at the penultimate declaration.

Coral spokesman David Stevens said: ‘The betting momentum is with Altior. He has a fantastic Festival record and a big following. He looks certain to be sent off favourite.’

In an interrupted season, Altior has only run twice. He was beaten by Cyrname in the 1965 Chase at Ascot. He did not run again until winning the Game Spirit Chase at Newbury last month.

His clash with his younger rivals is one of the Festival’s most-anticipated races.

Gordon Elliott’s Envoi Allen, seen by many as the banker of the meeting, heads the 25 remaining entries for Wednesday’s Ballymore Novices’ Hurdle.

Cheltenham have posted a public health notice on their website, urging racegoers to stay away from next week’s meeting if they are experiencing symptoms associated with coronavirus, have travelled through high-risk countries or been in contact with anyone who has.

The track announced earlier this week that they would be ramping up hygiene plans at the track. 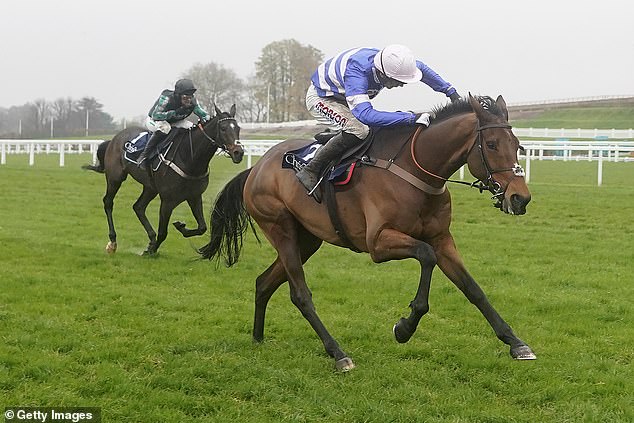 Meanwhile, Sandown’s Imperial Cup meeting on Saturday is hanging in the balance.

Friday’s fixture was called off on Thursday, along with the card at Leicester, and there is another inspection at noon on Friday with hopes pinned on a dry Friday and Saturday allowing the sodden course to dry out.

Clerk of the course Andrew Cooper conceded on Thursday: ‘There has been more rain and it has stayed longer than we anticipated. The issues are more widespread than they were before.’

Police fine IKEA shopper after finding their car looking like this

Traffic cops have fined an IKEA shopper after spotting packages from the store allegedly blocking the driver’s view. Officers from

Stunning photo as snow hits North Staffordshire – in May

Princess Margaret and the children of Biddulph Grange