By Marcus Townsend For The Mail On Sunday

Rachael Blackmore made history when becoming the first female jockey to win the Irish Champion Hurdle on Honeysuckle and the duo are joint favourites with some bookmakers for next month’s Champion Hurdle at Cheltenham.

Trainer Henry de Bromhead, who won his third Irish Champion Hurdle, has yet to commit Honeysuckle to the feature race on the opening day of the Festival on March 10 and the mare has the option of running in a race restricted to her own sex on the same day.

But that route looks unlikely after Honeysuckle extended her unbeaten run to seven races with a half-length victory from Darver Star.

The winning margin could have been bigger but she threw away a two-length lead going to the last hurdle with a slow jump before digging deep to get back on top.

Blackmore, 29, said: ‘She really had to battle today. She is very special. She has done everything I have asked her to do.’

Blackmore ensured she was the headline act on day one of the €2.1million Dublin Racing Festival by also landing the Grade One Arkle Novices’ Chase on De Bromhead’s slick-jumping Notebook. 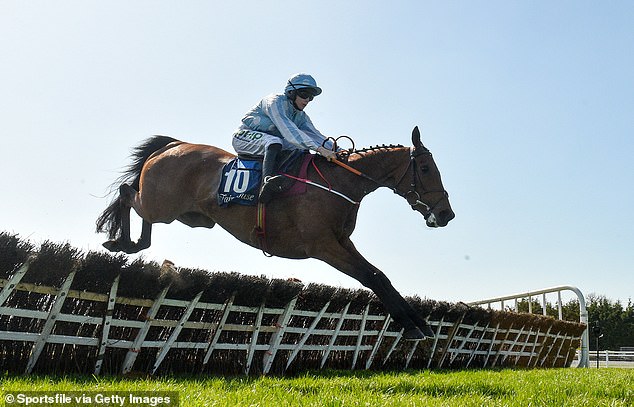 He is 7-2 favourite to win the equivalent race also on the opening day of the Cheltenham Festival.

Mullins described the gelding as ‘electric’ and his clash with Altior and Defi Du Seuil in the Queen Mother Champion Chase potentially looks the highlight of Cheltenham Festival.

At Sandown, trainer Olly Murphy landed his first Grade One winner with Itchy Feet in the Scilly Isles Novices’ Chase.