Altior has been ruled out of the Betway Queen Mother Champion Chase at Cheltenham on Wednesday.

Nicky Henderson announced on Sunday morning the brilliant two-miler was lame, after a dormant splint that had never caused a problem to the 10-year-old previously ‘reared its ugly head’.

The situation had improved markedly on Monday and he was declared for the two-mile showpiece at the 48-hour stage, although Henderson stressed more progress was needed and that he would not have run if the race had been then.

Speaking on Tuesday, the Seven Barrows trainer said: ‘What is really disappointing is the improvement from the night before last to yesterday morning was so good that we were genuinely optimistic that, as long as that recovery rate was maintained, we figured he’d be sound this morning, and that is not the case.

‘It’s flattened off, he hasn’t improved at all from last night, whereas the night before he improved dramatically. Consequently I think it’s only right now that he will be taken out of the race.’

He added: ‘It’s brutal – it’s not an issue that has ever bothered him before, he’s never taken a lame step in his life. The timing is just ridiculous, but that’s what we say every year – you know something will come and bite you, but there are certain ones that are a bit bigger than the rest.

‘It’s very cruel, and cruel on everybody to be fair. To get him back from that race at Ascot to where he is now – he’s been in such brilliant form, but he won’t be there to show it.’ 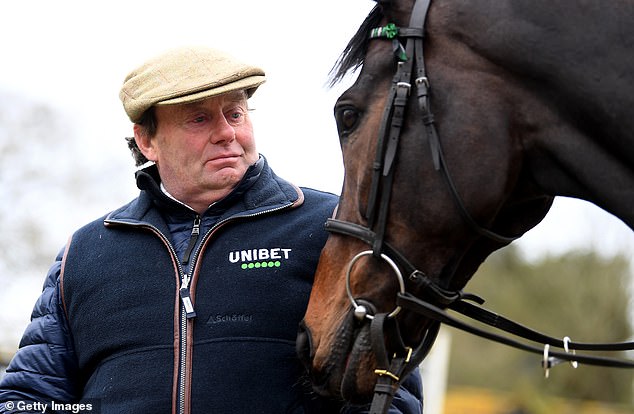 Trainer Nicky Henderson, pictured here with Altior, admits the timing of the injury is brutal

Beaten for the first time over jumps at Ascot in November, the Patricia Pugh-owned gelding returned to his best in the Game Spirit Chase at Newbury last month.

He would have been bidding for his fifth win at the Festival, having taken the Supreme Novices’ Hurdle and Arkle Trophy before his two Champion Chase victories.

Henderson will now look to the rest of the season with Altior.

Assessing potential options, he said: ‘There’s still Aintrees and Punchestowns and Sandowns, things like that. We hope to have him back for an assault there. 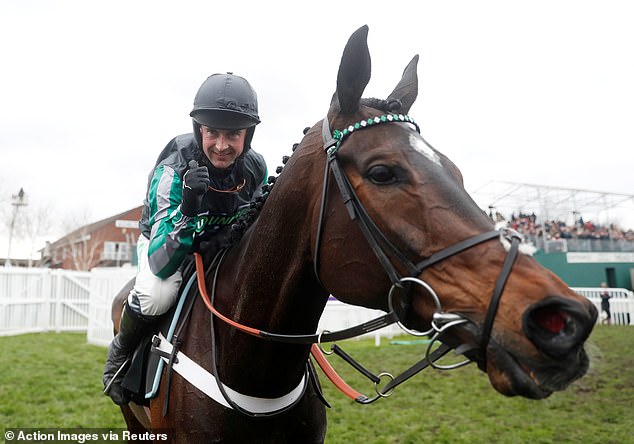 ‘I’d personally love to try Aintree (Melling Chase) over two and a half, that’s a different two and a half to anywhere else. That wouldn’t worry me at all, we did it with Sprinter (Sacre).

‘We could go to Ireland, we could wait for the Celebration Chase (at Sandown) that he’s won for the last two years.

‘The good thing is his X-rays and everything are 100 per cent. There’s nothing to see on this at all, there’s no damage done, it’s just like somebody has clocked it with a hammer and made it sore.’

Police have been called to a collision on the A50 this afternoon. Traffic has been stopped on the eastbound carriageway