Envoi Allen lived up to the hype with a supreme display in the Ballymore Novices’ Hurdle at Cheltenham.

Unbeaten in seven career starts heading into the opening race on day two of the Festival – including in the Champion Bumper last season – the Gordon Elliott-trained six-year-old was settled on the inside by Davy Russell.

At one point it looked as if long-time leader The Big Getaway had slipped the field under Paul Townend coming down the hill, with only Rachael Blackmore covering the move on Easywork, who had been keen enough. 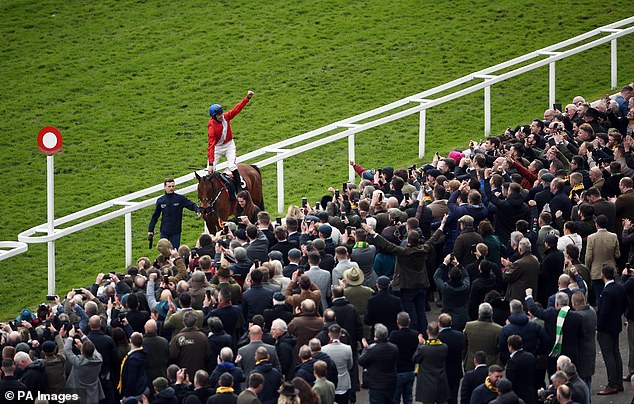 But an ice-cool Russell has not gained the experience of over 20 years in the saddle for nothing and began to make ground just before the turn for home.

On the long run to the last the 4-7 favourite quickened impressively and powered four and a quarter lengths clear up the hill. His stablemate Easywork stayed on gamely for second, with The Big Getaway third.

Elliott said: ‘He was our best chance of the week. Everyone was here to see him and he did everything he needed to do. He jumped, he stayed and when he got to the front, he did what he had to do.

‘He was bit tired after the race and knows he had a race today. Davy said they went a proper gallop and he showed how good he is. When he swung off the home turn I thought he was too far out of his ground, but listen both our horses ran great races, Easywork in second and him winning – it was brilliant.

‘He was our big runner of the week, so there was big pressure on us. I have to discuss it with the owners, but we will enjoy today and see what happens. He was bought to be a three-mile chaser and that’s all I’m saying.

‘I’d imagine Punchestown will now be the plan. It wasn’t an easy decision (to go for this race over the Supreme Novices’ Hurdle), but thankfully it worked out right.’

Russell said: ‘He’s just a marvellous horse. It’s great to be associated with him.

‘It’s a hard one to call. When he settles he switches off the engines and runs in neutral for a lot of the race. You don’t know when to pick him up then, because if you set him alight early he could do too much.

‘These horses are hard to come by, so we will enjoy today. Hopefully he can keep progressing and he will have to, as in this game you can’t rest on your laurels and you need to keep improving.

‘His attitude (I was impressed with). He has taken everything in – it is quite a long way to the two-mile-five start and it is a good test of a novice.

‘He travelled when I needed him and he jumped fantastic. If he wasn’t as good as I thought he was he wouldn’t have won, as I gave him plenty to do as in they had stretched and gone a good gallop and the ground is dead.

‘He had to work for it, and that’s what you get when you get a good horse. 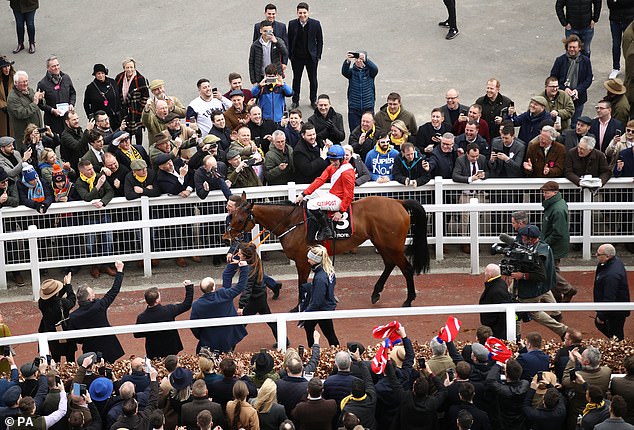 Chris Richardson, managing director for owners Cheveley Park Stud, said: ‘He has just confirmed what everybody thought he was – a proper champion.

‘No doubt we will sit down with Gordon and make a plan for the future. He has done nothing wrong at this stage and options are so many.

‘He is pretty special. It is like having an Enable or Stradivarius on the Flat, this is such a sensational horse.’

Willie Mullins said of the runner-up: ‘Our fellow ran great and was beaten by a proper horse. We’re happy.

‘He looks a real chasing type, with his style of jumping. I imagine he’ll be an RSA horse this time next year, but we might meet the winner there as well!’