World number 111 Billy Castle scored a second round victory over Ronnie O’Sullivan on a day of surprise results at the BetVictor Shoot Out in Watford.

The field is reduced from 32 to one on Sunday, with the winner to take the £50,000 top prize at snooker’s unique one-frame knockout tournament.

O’Sullivan’s natural fluency made him a strong contender for the title, but he missed several chances early in the frame against Castle. And when the Rocket failed to escape from a snooker, his opponent compiled a break of 43 which proved enough. Castle now meets Luo Honghao in the third round (click here for the last 32 schedule).

O’Sullivan’s place at next week’s Coral Players Championship in Southport is under threat – he is clinging on to 16th place in the one-year rankings but there are nine players who can still leapfrog him. For more on that story click here.

There were thrills and spills galore on day three at the Colosseum, not least in Brandon Sargeant’s win over Ali Carter. A break of 63 looked to be enough for Carter, but Sargeant got the chance he needed with four minutes to go and made 61 before missing a tricky cut on the final black. After a safety exchange, world number 115 Sargeant rolled the black into a baulk corner for victory. 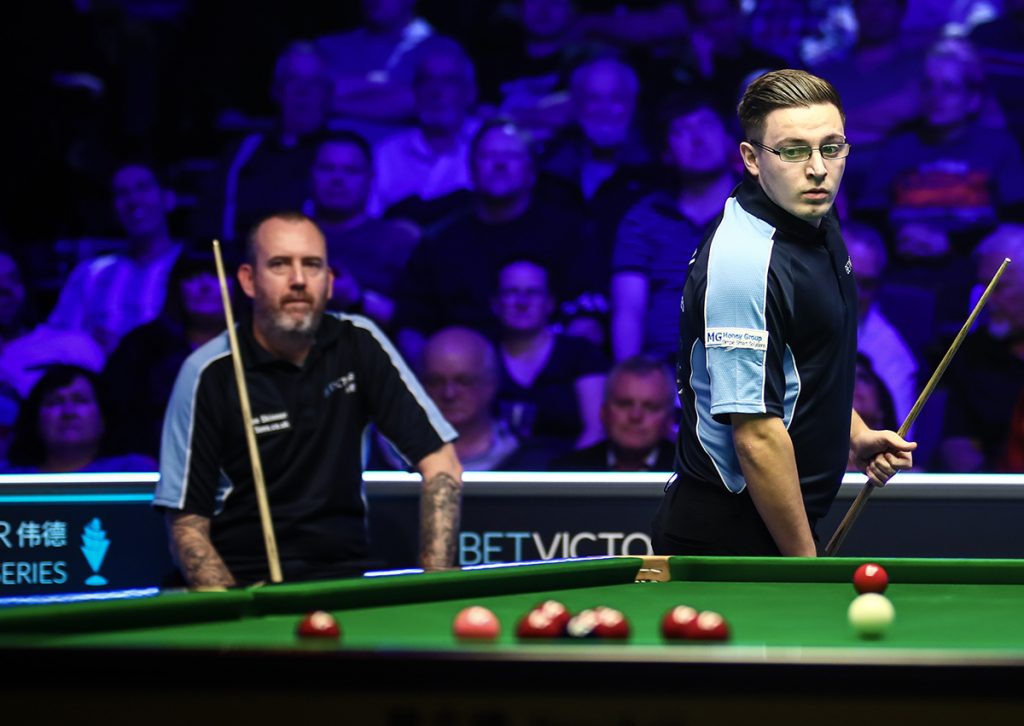 World number 83 Ashley Carty caused another upset as he knocked out three-time World Champion Mark Williams. Trailing 47-0 with two minutes to go, Williams sprinted around the table in making a break of 43, but missed a tough red to a centre pocket with ten seconds on the clock.

Three amateur players are still in the draw: Ross Bulman who beat Andrew Pagett, Dean Young who saw off Liam Highfield, and Aaron Hill who scored a superb win over Kyren Wilson thanks to a run of 47.

Two-time Shoot Out runner-up Xiao Guodong made a 101 to beat Ashley Hugill and he is one of ten Chinese players through to the third round.

One of those, 16-year-old Lei Peifan, scored a dramatic win over Kurt Maflin, who trailed 28-30 in the closing seconds and didn’t have enough time to pot the brown before the cue ball stopped rolling.

Ryan Day’s match with Joe Perry also went down to the wire, as Day came from 43-1 down to set up a winning chance, only to miss the last red when he needed two pots for victory.

Defending champion Thepchaiya Un-Nooh was beaten by Peter Lines while Anthony Hamilton made a late break of 39 to get the better of David Gilbert. Welsh Open champion Shaun Murphy made a 62 to beat Alexander Ursenbacher.

Police have launched an investigation after a driver died when his car collided with a bridge on the M6. Cheshire