Macari’s friendship with Baldwin, AKA Nello the circus clown, at Stoke in the early 1990s was immortalised in the BBC’s Bafta-winning Marvellous.

It started with the idea of providing a comic relief against the hard work that Macari demanded and took on a life of its own as Stoke went on to win promotion and the Division Two title before reaching the play-offs and cusp of the Premier League.

“I didn’t plan that first meeting with Neil,” said Macari as he launched into a monologue.

“I got the job at Stoke and, as you see in Marvellous, there were probably 10 people there welcoming me at the ground and singing songs. That was true.

“I went in for training, it rained all day and when I came out there was one guy still standing there. The rest had obviously gone home because it was hammering down with rain. The one left was Neil.

“The first thing that attracted me, and it would attract anyone, was his voice. He came over and said, ‘Hey, you’re the new manager of Stoke. I’m wishing you all the best.’ He had one of these voices that came out through his nose.

“I asked what he was doing here in the rain so he says, ‘I just thought I’d come to welcome you to Stoke.’

“So I told him to go home out of the rain and to get ready for work on Monday. He says he hasn’t got work on Monday, he’s just been sacked. I ask why and he says, ‘I complained about my wages.’

“I said that his boss couldn’t sack him for complaining about wages and he says he was a right sort, ‘When I got in the ring with him…’

“I thought it was something to do with boxing and he says, ‘He was the ringmaster at the circus, I was a circus clown.’

“I burst out laughing but I’d never met a circus clown before and certainly never met one who’s been sacked! It’s not one of those high profile jobs you think about.

“I’m thinking how I can help. He hasn’t got a job so on the spot, my mind told me to take him on and use him the dressing room for the banter, the laughing and joking. That’s what he’s done all his life, running around the ring making people laugh, making faces at people.

“So I ask how if he fancied a job with me, asked him who he supported and he said he was Stoke mad. I told him, ‘9am, Monday, see you.’ Jumped in my car and shot off.

“All over the weekend I was wondering if he was going to turn up. I was thinking I could use him for all the times when you got beat, when you did this, when you did that, the not so good moments at a football club of which there can be plenty. I thought I could bounce off him and instead of people moaning about no drink, it could lead to some laughing and joking.

“So at 9am on Monday he turns up. I tell him he’s starting at 10am. He says, ‘Doing what?’ and I tell him he’s the new kit man. I said, ‘It’s a piece of cake for you, you put out the kit, clean the boots, make them laugh, make them happy. You’re the ideal man for the job, you’re going to be my biggest ever success.’

“I said that tongue in cheek because I’d been around the country and made money selling players for a lot more than we’d signed them. I thought after why I’d said that because nothing can happen that can lead to him being my biggest success!

“He asked what I wanted him to say and I said he could say anything because just hearing him talking will be enough, like it had been with me. So I go in the dressing room, tell the lads we’ve got a new kit manager and can see them all looking and thinking, ‘What the heck is this?!’

“So I boosted it up a bit and say, ‘This is our new official kit manager, anything you want go and see him,’ and he says a few words of introduction through his nose. He then called me over and told me was starting to sweat with that chicken head on so I took the head off and introduced him properly for the first time.

Stoke-on-Trent Live has launched a new commenting system, with the aim of generating better conversations and improving everyone’s experience of visiting the website.

How can I get involved?
Log on via the interface in the top right-hand corner of the website with your name and email address. Once you verify your email account, you’re good to go.

What type of comments are you looking for?
We want balanced and fair comments that are relevant to the story they are written on. We also encourage you to respond to other comments, as long as you do so respectfully.
We’ll be switching on a follow button, so if you’re interested in one particular story, you’ll get an email to your account whenever anyone says something new.
Constructive feedback on articles is also welcomed.

“That’s what we did. I’d tell Neil to go in and tell them what he thought and he’d say, ‘—-ing shocking.’

“Following team talks like that they vowed revenge so they used to do some terrible things like lock him in the sauna and he’d shout to me, ‘Boss!’ down the corridor. It worked.

“On a Saturday, my food would get would get delivered to my office at 11am and he’d come in pretending to ask me what trainers I wanted to wear – I only had one pair – and he’d tuck in too. I could quickly detect that he was going to be loyal, really, really loyal.

“I remember before one game against Port Vale I had mentioned to him that the local reporter George Andrews had criticised the team. When George came to get his ticket, little did I know that Neil was there, grabbed him, took him into the laundry, bound and gagged him! I’m in the dug out and he’s sat behind me, trumping with a big pie in his mouth.

“The game started and 10 minutes later a steward came down and tells me George Andrews has gone missing, Radio Stoke are without a commentator. I say I haven’t got a clue, we’re playing Port Vale and it’s do or die, you must win the game, you know what it’s like at Stoke.

“Next thing, Neil pokes me in the back and says, ‘Hey boss, he’s in my laundry.’ I said he’d better go and get him out! I sent someone with him, who took a picture of George. I’m thinking about football for the rest of the day until later when I suddenly remember.

“George was all right. He still does the commentary now, he’s still got the picture and still shows me it.

“But it was a show of Neil’s loyalty. He’d go to any length to protect me and my team, including kidnap!” 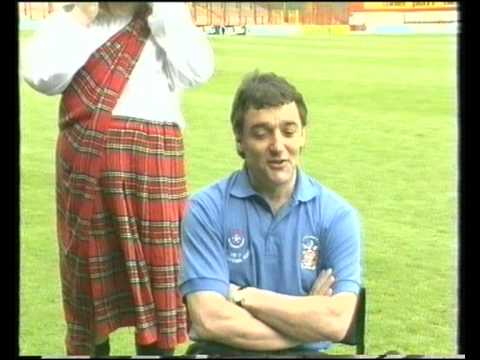 Marvellous was released in 2014, with Toby Jones starring as Nello.

It won the Bafta for single drama while Gemma Jones was named best supporting actress for her portrayal of Baldwin’s mum.

Macari said: “It all worked but little did I think that so many years later someone would ring me up and say they wanted to do a film about Neil and his time at Stoke.

“I laughed because (it’d just been part of my life) so he asked if all the stories he had heard had been made up. And he’d picked up all the stories so I said, ‘Well it wasn’t exactly normal but we did it because of this and that.’

“I thought it was a wind up, someone getting me back for something I’d done, but he came back (and it happened). Everything I wanted in him, was there… he’s a funny man.”

Police kicked down a door to arrest a 31-year-old man following a raid on a convenience store. Officers were called