‘I will probably do a bit of landscape gardening to try to earn enough to pay the bills’: Grand National jockey Danny Cook is looking for extra work after racing shutdown

Jump jockey Danny Cook should have been dreaming about riding leading hope Definitly Red in the £1million Randox Health Grand National at Aintree on April 4.

Instead, with racing closed down for six weeks until the end of April — and few betting that it will be close to a return then — Cook is facing up to trying to earn a living working in his brother Tony’s landscape gardening business in Essex.

The 36-year-old jockey, who is married to Kirsty and has two children, George, four, and 18-month-old Primrose, has enjoyed a solid season with 39 winners, including Haydock’s Peter Marsh Chase on Vintage Clouds, from 231 rides.

But Cook, who rides principally for trainers Brian Ellison and Sue Smith, potentially had the most lucrative four weeks of his year ahead of him, including Ayr’s Scottish National meeting as well as three days at Aintree.

Cook, who had a third place at Wetherby on his final ride before the racing shut-down on Tuesday, said: ‘It is only just sinking in. I have family with a landscape gardening business so I will probably do a bit of that to try to earn enough to pay the bills.

‘The end of the season has some of the bigger races so it is a bit gutting that racing is off. The next few weeks are usually where we hope to earn our money to survive the quieter weeks of the summer. We will have to come together in difficult times.’

Cook had 15 rides in the 14 days prior to racing being called off and each one earned him a fee of £173 plus a percentage of any prize money. He is still riding out for the Smith stable near Bingley in West Yorkshire but recognises that could soon end as jumps trainers try to reduce costs by taking horses out of training and giving them an early summer break. 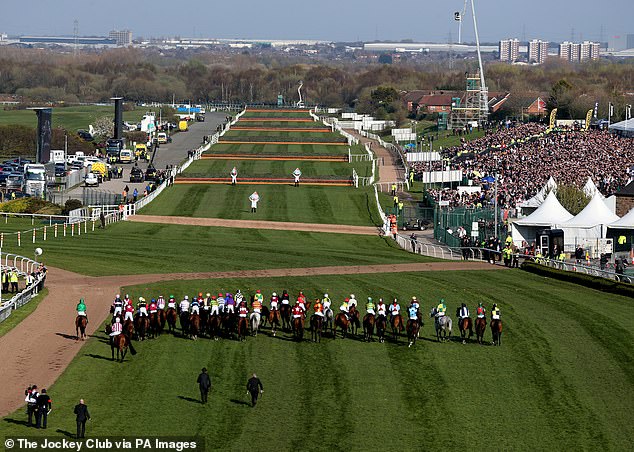 At least the physical labour of landscape gardening will help Cook maintain fitness.

Cook added: ‘The plan is to try to find some more work at the end of the week. My brother does hard landscaping — not just cutting grass and pruning bushes. It’s things like patios so there is heavy lifting. It is physically demanding.

‘I do a lot of running to stay fit and boxing training at an amateur club but they’ll be shutting the gym.

‘Everyone in the weighing room is trying to look for other lines of work.

‘Everyone at Wetherby was in a state of shock. But we are all trying to help each other to pay bills.’