Considering Hong Kong borders mainland China, from where Covid-19 emanated, it might sound surprising that jockey Neil Callan feels he is currently ‘in the safest place in the world’.

What might seem harder to grasp is that on Sunday Callan rides in the Hong Kong Derby at one of the biggest meetings of the season, which will generate £150million in betting turnover.

The huge Sha Tin racecourse, where more than 60,000 spectators should be gathering, will seem like an echo chamber, with numbers restricted to around 600 participants, officials and owners — but in apartments around the city, where 7.5million people live, online betting will be as frantic as ever.

Neil Callan is aiming to win the £2.2million jackpot at the Hong Kong Derby on Sunday

Callan, 41, who lives in an apartment beside the racecourse with wife Trish and their four sons — Jack, Henry, Ted and Will — rides Columbus County in the HK$20m (£2.2m) mile-and-a-quarter race, one of the biggest sporting events of the weekend on a planet in lockdown.

Irishman Callan, the 1999 champion apprentice who was twice runner-up in the British Flat Jockeys’ Championship, said: ‘The Hong Kong Jockey Club have done an amazing job putting racing in a bubble.

‘That’s with everybody, including the jockeys, being mindful of what is going on.

‘When the outbreak started escalating, my wife was scared because we have young children. A lot of people shot off back to Australia, England and Ireland but I said, “Lets monitor it and see how it goes”. I am glad we stayed rather than knee-jerked and ran off. ‘I think we are now in the safest place in the world.’

Sunday’s meeting will be the 16th run in Hong Kong since restrictions were imposed.

There is regular testing for the main players, while owners who attend must sign a health declaration. Callan said he is getting used to riding in front of empty grandstands and sees the wider social benefit of giving the public a distraction in traumatic times.

Callan, in his seventh season riding in Hong Kong, added: ‘For the first few meetings it felt a little eerie when you are used to up to 100,000 people at Sha Tin. It is like going out to a trial morning, except we are racing for prizemoney. 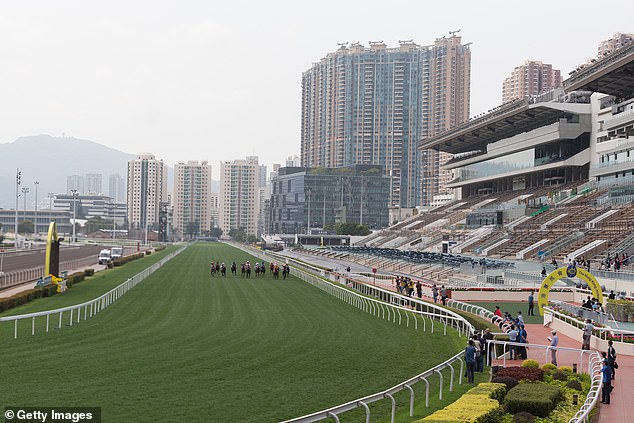 There will be no spectators at the Sha Tin racecourse that usually welcomes 60,000 fans

‘The paddock is what you miss. You are used to the passionate fans cheering you around the paddock. When you are out on the track and focused on the race, everything outside goes until you cross the finish line.

‘The news is quite depressing. In Hong Kong, where the public are cooped up at home, at least they have something to look forward to twice a week.

‘In every culture sport can bring people together and with the way things are, it will bring them even closer.’

Columbus County is an outsider in tomorrow’s race, with Callan hoping his lightly-raced mount — who has a favourable draw — can snatch a place. The hot favourite is Golden Sixty, winner of nine of his 10 races in Hong Kong, including the Classic Mile and Classic Cup earlier this year.

The biggest danger to Golden Sixty could be ex-Richard Fahey Glorious Goodwood winner More Than This, placed behind Golden Sixty in both those aforementioned races.

The BMW Hong Kong Derby is live on Sunday on Sky Sports Racing at 8.35am.