NHS charity receives more than £25,000 from all-weather flat racing champions Ben Curtis, Mick Appleby and Godolphin as winners donate part or all of their prizes following conclusion to season

Ben Curtis, newly-crowned champion jockey for the all-weather flat season, has handed part of his winner’s prize to an NHS charity.

Champion trainer Mick Appleby and champion owner Godolphin are also among the category winners and runners-up who have donated all or part of their prizes allowing over £25,000 to be handed over.

The beneficiary is SASH, charity for East Surrey Hospital and all the services provided by Surrey and Sussex Healthcare NHS Trust, local to Lingfield racecourse where the £1million All-Weather Championships Finals day should have been staged on Friday.

Ben Curtis, champion jockey for all-weather flat season, has given part of prize to NHS charity

The momentum Curtis, 30, carried out of 2019 extended into his winter season. His 101 winners is one short of the record set by Luke Morris, this season’s runner-up.

Curtis said: ‘I have had a brilliant campaign on the all-weather over the winter. Luke Morris and Hollie Doyle kept me on my toes the whole way through it.

‘Both of them were riding winners relentlessly and it meant I had to up my game. In any sport you need competition. 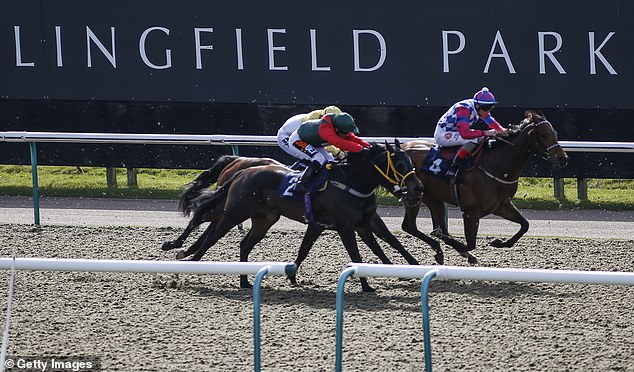 The beneficiary is SASH, charity for East Surrey Hospital and all the services provided by Surrey and Sussex Healthcare NHS Trust, local to Lingfield racecourse

‘My one regret is falling just short of Luke’s record. I would have loved to set a new British record for the all-weather and, had we been able to finish the season, hopefully I would have done that.

‘I am giving a donation of £2,000. The NHS do so much for us on a daily basis. I have had a few falls and they have always looked after me impeccably. I think now more than ever people are appreciating what they do.’

The winning-most horse of the season was Gary Moore-trained Agent of War, who won seven times for her syndicate of owners, The Foreign Legion.

Is Watford vs Stoke City on TV? Kick off time, live stream details and how to follow