The chances of Tiger Roll attempting to win an historic third consecutive Randox Health Grand National at Aintree in April continued to hang in the balance on Tuesday night after his owners expressed their disappointment with the weight he will be asked to carry in the marathon £1million contest.

Tiger Roll, without a run since winning last year’s Grand National by two and a half lengths from Magic of Light, is due to run in Sunday’s Boyne Hurdle at Navan, having recovered from a minor knee operation.

The plan would then be to try to win a third Cross Country Chase at the Cheltenham Festival before potentially attempting to join Red Rum as a three-time Grand National winner, becoming the only horse to achieve the feat in consecutive years.

Senior BHA jumps handicapper Martin Greenwood has given Tiger Roll 1lb less to carry in the National than he would be allotted in any other British handicap chase but, with the top weight of 11st 10lb, he concedes 4lb to 2018 Cheltenham Gold Cup winner Native River.

Tiger Roll is owned by Ryanair chief executive Michael O’Leary, whose Gigginstown Stud horses are managed by his brother Eddie, and they had been pressing for a greater incentive from the handicapper to persuade them to commit to running at the Liverpool track on April 4.

Eddie O’Leary said: ‘We have to give a Gold Cup winner and a horse who won easily last Saturday 4lb and we are coming back from injury. Have they taken into account recent form? I see something unfair there.

‘We love our Tiger, he is invaluable to us. The welfare of the horse is more important than the race. We’ll get through Navan and the Cheltenham Festival and we will then make decisions.’ 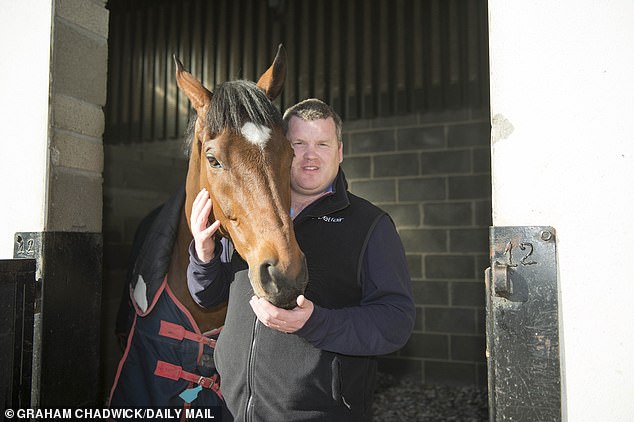 O’Leary said Tiger Roll would be given an alternative entry in the Betway Bowl at Aintree, but one man who is keen to run is trainer Gordon Elliott.

He said: ‘We were hoping for a pound or so less but Martin has a job to do. Tiger Roll has a chance of making history. If he was mine I would run him, but I only train the horse and Michael O’Leary will make the final decision.’ Tiger Roll is 13-2 favourite to make history.

Greenwood said: ‘As a handicapper, you cannot take any notice of outside noise and concentrate on the evidence in front of you. I still think Tiger Roll is the best winner of the race in modern history. My duty and responsibility is to give everybody the same chance. We are not here to gift anyone a race.’

Eye-catching Grand National weights include One For Arthur, the 2017 winner, who has been allotted 10st 2lb and Welsh National winner Potters Corner — part-owned by Wales centre Jonathan Davies — who has 10st 6lb.